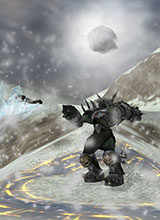 Out of the box, Torque engines TGE and TGEA offer a valuable assortment of building block effects, but if you really want complex, layered, and dramatic special effects, you'll want something extra.

Highlight targets and object selections with style. AFX Selectrons are designed specifically for crafting dynamic special effects for client-specific selection highlights and with the same repertoire of client effects used for magic spells, the design possibilities are enormous.

Independently constrain the position and orientation of any effect to other scene objects such as a spellcaster, a target, a projectile, or the camera. Attach effects to animated object nodes, such as a character's hand or foot. Create complex tracking effects using constraint history. Aim effects at the camera or other objects. You can even constrain effects to other effects.

Get a head start on your magic spell and other effects with a varied set of pre-built example spells. A number of sample effects are included with the core product, with additional spell effects available in the content pack, SpellPack1. These are complete implementations of showcase spells (with audio), covering a range of spell types typically found in RPG and other MMO games. Nearly all of the sample effects are compatible with both TGE and TGEA while their lighting and materials are carefully tuned for each engine.

AFX 1.0.2 for TGE is available now at GarageGames.com. AFX 1.1 for TGEA and TGE is in its final testing phase and will be released soon.

AFX was conceived and implemented by Jeff Faust of Faust Logic.